I initially found it ironic that earlier this month Atlanta Chef Giovanni DiPalma had been accused of alleged labor violations by the State of Georgia. After all, in that very same week one of his restaurants, Antico Pizza Napolatana was voted best pizza by Zagat. I wondered, if the labor allegation was true, how could one person have the capacity to exist on both ends of a seemingly mutually exclusive spectrum? Can a chef with obvious culinary prowess and respect for the laws of cooking operate in a different state of mind when considering matters of his employees?

Not a single second went by before I remembered that DiPalma’s story lives in the restaurant world, which as many of you know, is a world where logic defers to gut instinct and caution is often thumped by a carpe diem ego. With a predisposition for volatility this industry tends to attract those who can weather the unknown and/or those who are just plain crazy, which for me, is why the Antico paradox began to resolve itself; a guy who makes an award winning pizza could indeed turn on his employees. Atlanta is no stranger to chefs breaking bad. Paul Luna infamously threw temper tantrums when patrons of his former Buckhead restaurant Luna Si asked for a salt shaker. I worked at the original Nikimotos in Buckhead where a French chef, Guy or Gi, (I can’t remember his name), shouted obscenities from the kitchen so loudly he could be heard throughout the restaurant. A good friend of mine had a run in with DiPalma at Antico years ago that ended with the red faced chef shouting insults during a dinner service. Chefs put out amazing plates of food but many struggle finding emotional balance in other areas of their businesses.

Like many artists, some chefs have a dark side, an alter ego that collects on the debt accrued by the constant giving of a culinary perfectionist. While customers pay the tab in a restaurant the consideration never really equals the work that goes into producing a great meal and orchestrating the circus that is day to day operations. The resulting chasm can rear its head in the form of restaurateurs doing things they probably wish they hadn’t done. Lost revenue, bad Yelps and even law suites can follow. But then again Americans love bad boys with tempers; John McEnroe, Gordon Ramsey, Walter White…we love when they’re bad.

As a former owner, I know what it is like to be sucked into the vortex of the restaurant world. Some days there is no coming up for air and your oxygen deprived mind does abnormal things in order to survive. Priorities shift and suddenly logical thoughts like paying rent on time or keeping your employees happy become unfocused. It becomes about the artist and the drive to sustain the dream. Everything else falls by the wayside and of course, like any plane out of control, a crash is imminent.

So it seems DiPalma might be in a free fall. Time will tell whether he screwed his employees or just got a caught with his pants down in an embarrassing situation. Until then, Mangia! 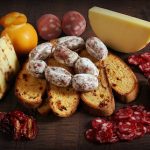 2014 – A Year of Creative DeconstructionGeneral